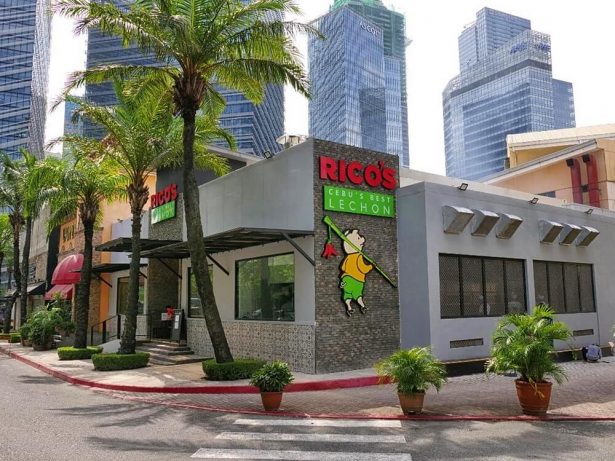 The favorite Cebu lechon is now in Manila!

As someone who had grown up in Mindanao, eating (and cooking) lechon is always part of our family celebrations. Whether it’s a day at the beach or a wedding reception, there will always be lechon.

We all know, though, that Cebu has the best lechon in the country. My sister always raves about the lechon in Carcar. Not being a resident of Cebu, I just had to take her word for it. After all, lechon is lechon, right? 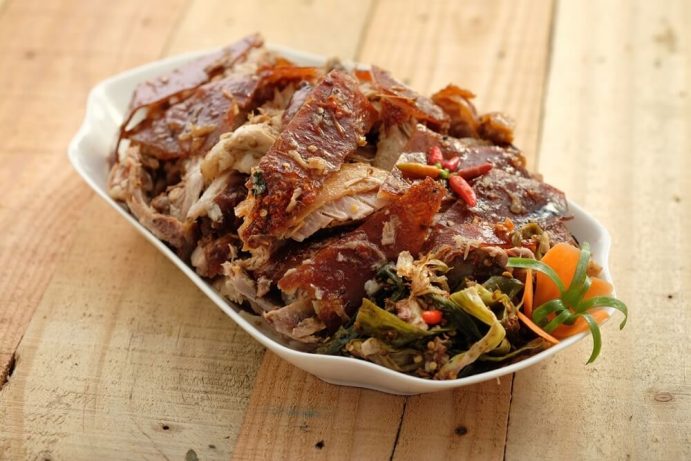 Their bestseller is the spicy lechon (P950/kl)

Wrong. I had a taste of Rico’s Lechon the other day — they had just opened their branch in The Fort Strip in Bonifacio Global City, their first branch outside Cebu — and all I can say is she was right. The lechon in Cebu is definitely a cut above the usual lechon I’ve tasted in Manila and in my hometown.

Rico’s Lechon, consistently awarded the Best Cebu Lechon for several years, even winning the Asia-Pacific Stevie International Business Award in Tokyo, Japan in 2017, was founded by Cebu native Enrico Dionson in 1995. He had several branches running in Cebu until last year, when he ran into problems with his business permits.

Rather than continue seeing all his restaurants closed, Rico decided to sell the brand to his friend, George Pua, president of MEAT Concepts Corp., which also has a number of international restaurant franchises in the Philippines.

“I’ve been a patron of Rico’s Lechon for years and personally believe it’s the best,” Pua said in a statement. “We want to be able to have Cebuanos take pride in sharing this with the rest of the country, and eventually the world.”

A highlight in the Manila branch is the Roasting Pit, where you can watch the lechon being roasted. In Cebu, they do it outside (which is standard), but of course, in BGC, you can’t have anyone roasting pigs on the parking lot. They have it indoors, complete with high-tech ways to ensure safety and food quality standards are kept. Anyone can view the Roasting Pit, including people just passing by. For those who haven’t seen lechon being prepared before, it would certainly be a treat. 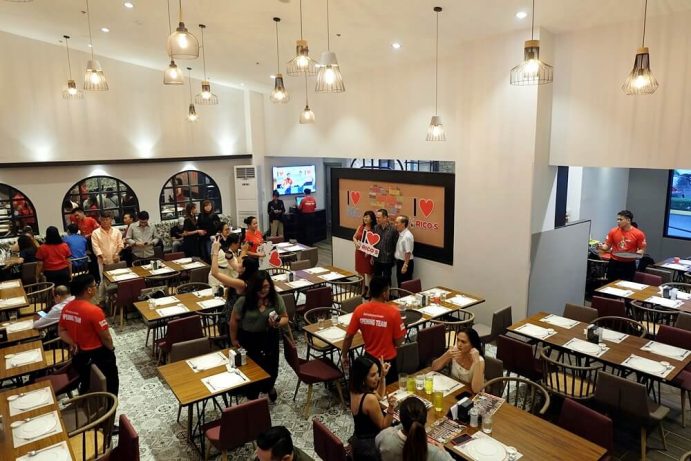 Inside Rico’s. The founder is wearing peach-colored shirt (left), while George Pua is in stripes (by the board).

Located at the Fort Strip, Rico’s Lechon is very easy to get to and find. Its logo — a pig bringing his own bamboo stick (does the pig know it will be used to roast him with later? hmmm) — is distinctive and easy to see from the street. The 180-seater restaurant looks very modern and airy and the mixed styles of the chairs give it a warm and cozy vibe.

When we were there, the place was packed, and every seat and table were taken. It was a challenge moving around. Fortunately, despite the very busy floor, the wait staff were professional and no drink or food was spilled that day. 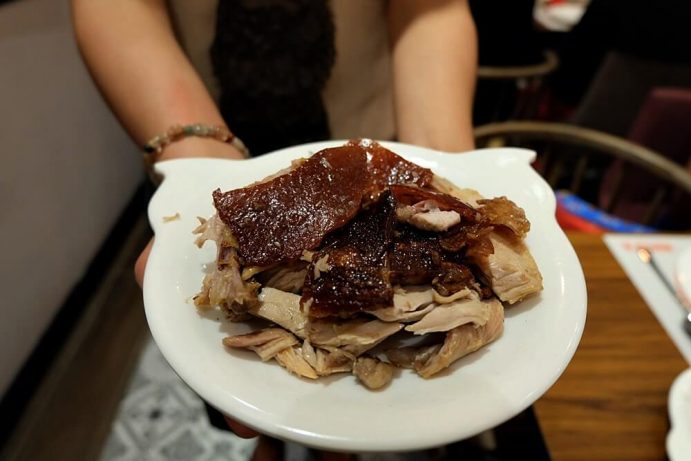 The bestseller in Rico’s Lechon is of course, the lechon. I ate it as is (no rice) and I didn’t even look for sarsa (lechon has a special dip). Usually I would need sarsa to make the lechon more delicious, but Rico’s can be eaten on its own. The secret? They use a variety of herbs and spices that give the cooked lechon a very good flavor. 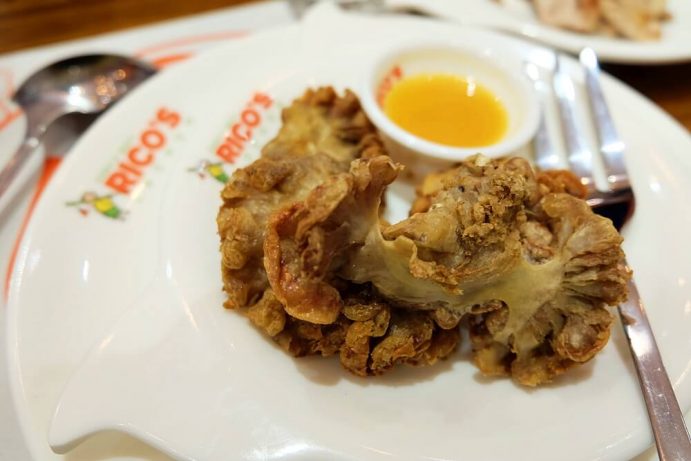 Another of my favorite from Rico’s Lechon is the chicharon bulaklak. I’ve had it before, of course, but nowhere is it tastier than here. I think I must have finished a whole plate by myself, it’s so tasty. It’s deliciously crispy and best paired with their Suka Lami vinegar mix. 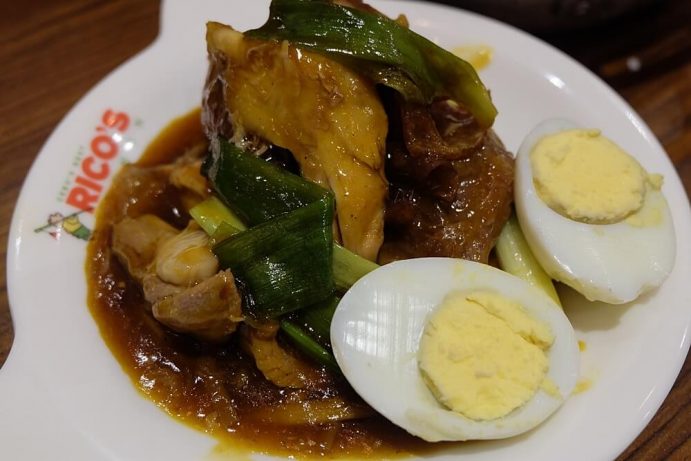 We also had variations of lechon dishes, like the lechon humba and the lechon paksiw. Lechon humba is rich in fatty parts of the lechon; it is a favorite in Mindanao but I still find it too fatty for my taste (even though I’m on Keto and should technically be eating a lot of it). 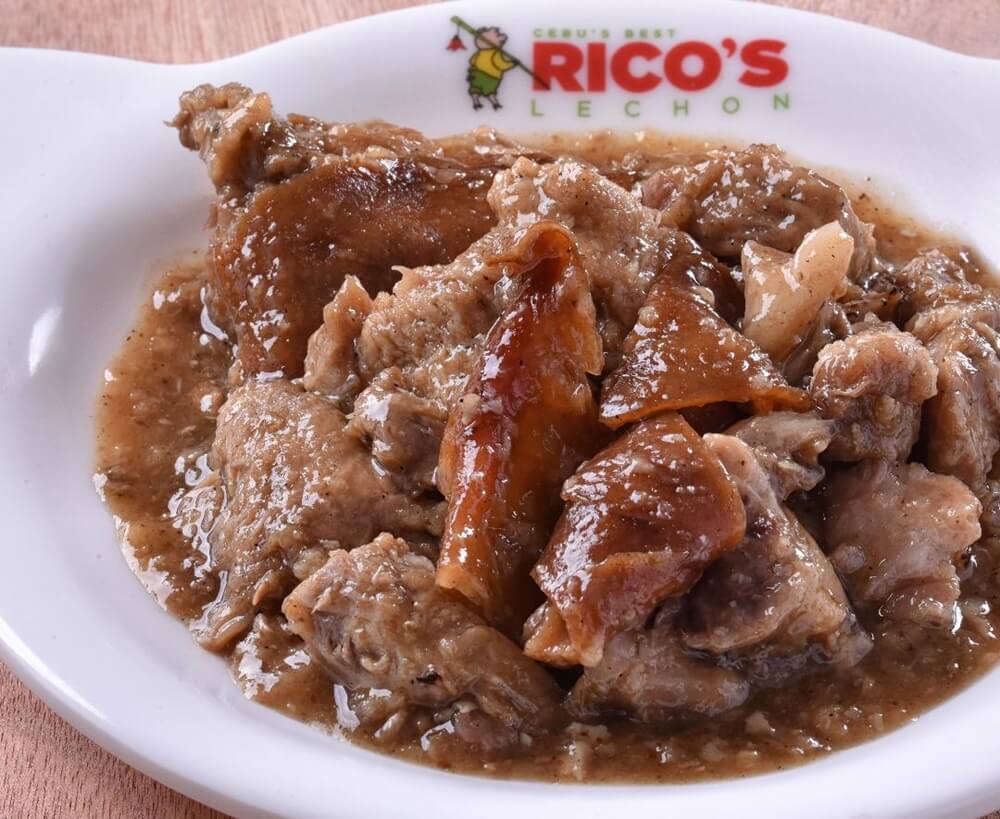 I liked the lechon paksiw, though. It also tasted much better than the usual lechon paksiw I’d had, probably because of the special seasonings used by Rico’s. 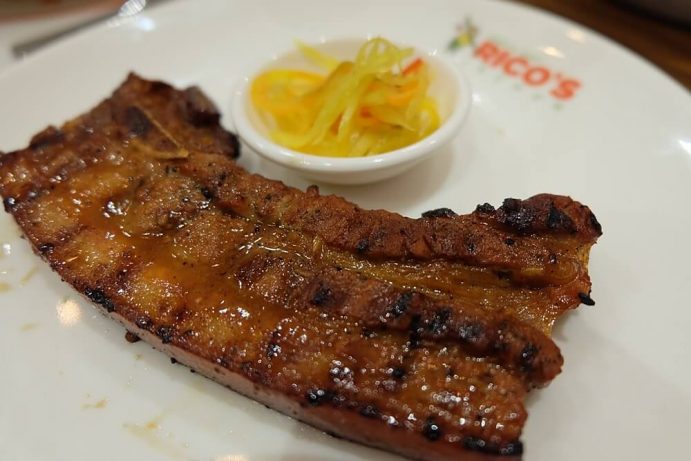 If you like more pork dishes, they also have liempo (grilled pork steak). It was just fine for me. 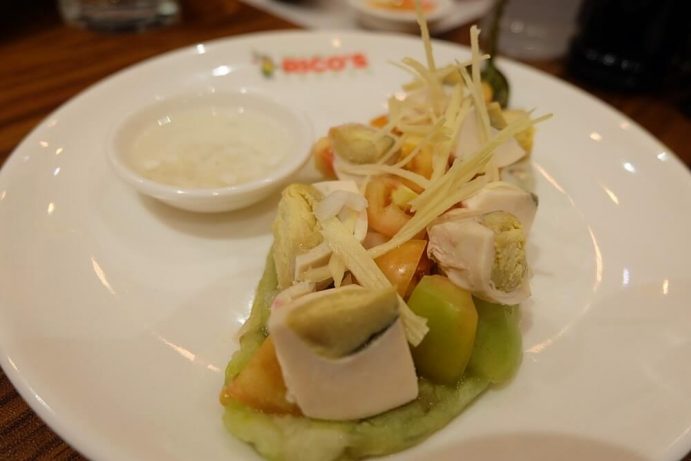 Their take on the ensalada (eggplant salad, P140).

Since I didn’t eat rice (a pity, because their fried rice trio is supposed to be very good), I ate a lot of eggplant salad and a bit of mongo. Both tasted really good, especially the eggplant with its slices of salted egg and tomatoes. 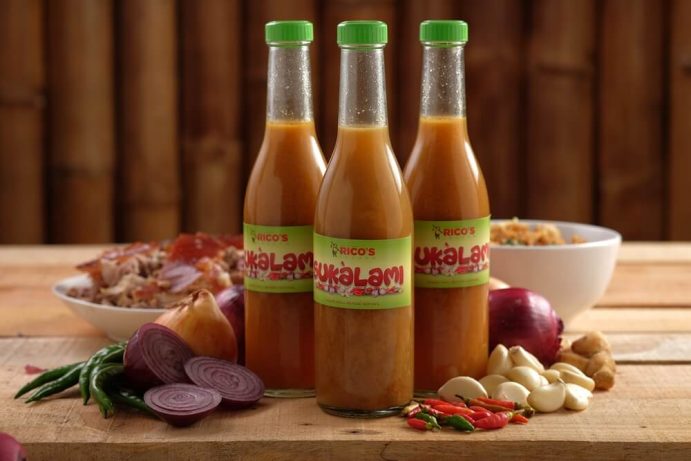 Buy this if you like eating grilled or fried foods. (P140)

Want to bring home something? Buy a bottle of this vinegar (Suka Lami means Delicious Vinegar). If I could slurp it up, I would have. It’s good for grilled meats and an excellent alternative to the heavier sarsa usually used in lechon.

We went to eat at Rico’s when it was quite full, so I don’t know what the service is like during regular days. At that time, the waiters were so busy that we didn’t get half of our order until after we’d all eaten.

Too bad, because by then I was already too full to taste the sizzling squid (P320) and the tuna belly (P380). There was also bam-i (noodle mix, a favorite in my hometown) (P280) and adobong kangkong (P180) that looked delicious but remained uneaten. 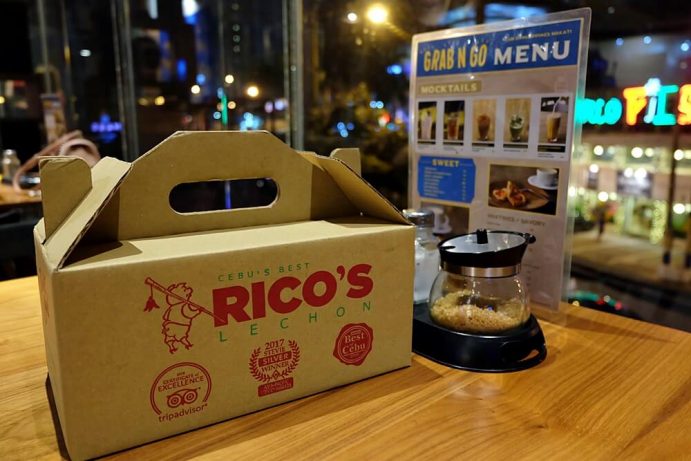 Take Rico’s Lechon home with you!

Overall, I would definitely eat here again, and aside from the lechon (or its spicy variant), I would order chicharon bulaklak again. I might also try their bulalo (bone broth, P640) and their sizzling tanigue (P380). Note though, that I’m doing the Ketogenic diet, so I haven’t tried their rice mixes and desserts, which, I’d been told were delicious.