Besides must-see attractions in Puerto Princesa, Palawan has its share of must-try delicacies. One of the most famous (and exotic) of these is the tamilok. 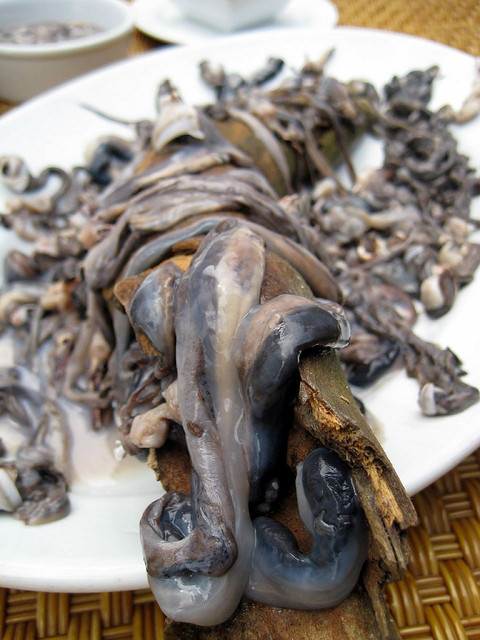 This woodworm is a delicacy in Palawan. ©cyberbaguioboy

Often described as a woodworm or shipworm, the tamilok can be found inside the trunks of fallen or dead adult mangrove trees. It’s pretty elusive, so the tamilok is always a guaranteed best-seller among locals and tourists whenever it becomes available.

Although it may look like one, the tamilok is not a worm. It is actually a mollusk with a fat, slimy and soft grayish body. It’s longer than a regular worm, too, measuring more than 12 inches on average. It also has a pair of very small shells at one end, which it uses to bore its way through wood submerged in sea water, ultimately destroying the wood.

But where did the name tamilok come from?

Legend has it that there were two Americans who were visiting the Batak tribe. Astonished to see the tribesmen eating woodworms, one of the Americans called out to his companion, saying, “Tommy, look!” The tribesmen thought the two were experts on the woodworm and that the man was calling the delicacy by its actual name. So tribesmen began using the same words to refer to the woodworms, with “Tommy, look!” becoming “Tamilok” in the local version.

Today, many locals living near mangrove areas gather tamilok and sell it directly or supply it to restaurants. And often a portion ends up as “pulutan” (food consumed while drinking liquor).

Sellers with styrofoam containers pack the fresh tamilok in plastic bags after they are cleaned. The tamilok can be consumed on the spot, as it is. Those who re more adventurous dig straight in with their hands. They just pick upthe tamilok, dip it some vinegar (sometimes with chili and calamansi) and eat it.

Baker’s Hill in Puerto Princesa serves tamilok as a kinilaw (like sushi) dish. It is marinated or soaked in strong vinegar, similar to a ceviche. This is the classic method of preparing tamilok in Palawan.

At Kinabuchs Grill and Bar, also in Puerto Princesa, ceviche-style tamilok is one of the specialties (along with a deep-fried breaded version). When tamilok is served on a platter, a fork or knife may come in handy. The former can be used to twirl the tamilok as if it were spaghetti or to hold up a whole piece. The knife works for those who prefer to slice the tamilok into smaller pieces before consuming it.

Ready-to-eat tamilok may appear like large and translucent strips of pasta. Taste-wise, many say it reminds them of oysters but with a slimier and milkier texture. The tamilok is also slippery and could momentarily stick to the back of your throat. Some find it difficult to swallow and opt to wash it down with some water or liquor.

The pairing of tamilok and liquor is particularly popular. In fact, it is a favorite pulutan whenever locals drink tuba (local alcohol). In restaurants, those who order tamilok often also request for some beer or vodka to go with it.

Tamilok may not be the most appealing of dishes, but it always worth a try. It may turn out to be a favorite and you might even prefer it over oysters. So whenever you’re in Palawan, make sure to include tamilok in the list of delicacies you should sample.

3 thoughts on “Dare to Eat the Tamilok in Palawan!”