A popular Filipino food that’s good with rice but mostly eaten when out on a drinking spree is the pork dish called sisig. It’s usually served sizzling on a hot plate; a heaping serving of pork  bits consisting of chopped ears, cheek, and chicken liver seasoned with soy sauce, lemon, and chili. It originated from Pampanga and celebrated during the annual Sisig Festival that started on December 2004. Meat lovers and beer drinkers certainly love it! 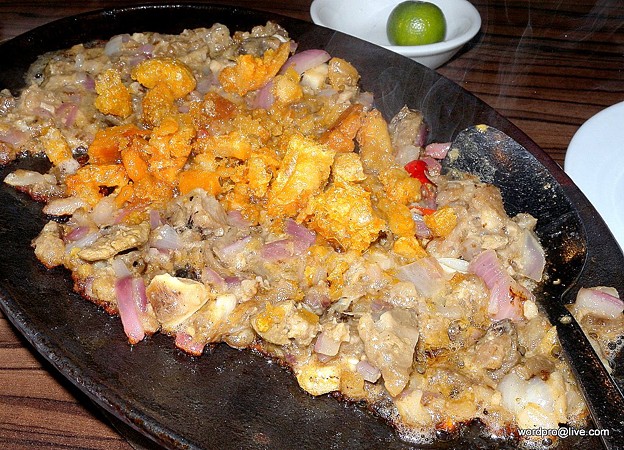 Many years ago, sisig was actually a vegetarian side dish. It was a kind of salad consisting of green papaya or sometimes guava seasoned with a dressing made of vinegar, garlic, and a dash of salt and pepper. Basically, it’s like the fern salad that you most probably know of (the one with vinegar and salted eggs).

It was believed that the evolution of this dish started when residents of Angeles City began putting some meat that they got from Clark Air Base. The Americans living there did not use pig heads in preparing food, so these were sold at a very low price and used by Kapampangans in their dishes.

Aside from being present at drinking sprees, the modern sisig has also become a staple food for parties and fiestas. It has always been a part of Kapampangan restaurants’ menu and everyone living in Angeles City definitely knows this dish.

If you’re planning to visit Angeles for a taste of this mouth-watering dish, better go to the right places. Here are the best sisig places in the city.

It was around the 1970s that Lucia Cunanan, also called Aling Lucing, reinvented the method of cooking sisig. She is the food genius who came up with the grand idea of broiling the meat before grilling to ensure its tenderness, and also the technique of using sizzling plates.

Aling Lucing’s is probably one of the most popular sisig place not only in Pampanga, but also in other parts of the country, since they already have other branches. Don’t think twice about eating at this place for the taste of their sisig is really one of a kind!

Although not as popular as the sisig of Aling Lucing, their version of sisig is the bomb! The awesome couple, Milagros and Ruben Gomez, started cooking this wonderful dish in 1986. It rapidly became popular because of the crispiness of the pork and its delectable flavor. Their sisig is so delicious that even celebrities go to Angeles City just to have a taste of it.

With the increasing popularity of sisig, many chefs all over the country are attempting to make their own version of this dish. Why choose the sisig of Angeles City? Kapampangans are well-known for their culinary prowess and also, nothing beats the original! Nuff said.