La Paz Batchoy is a well-known noodle soup dish that traces its roots to Iloilo City. Foodies will surely enjoy the city’s trademark dish. It is a treat to the taste buds, and is definitely more satisfying than the “La Paz Batchoy instant noodles” commercially sold in the supermarket. Anyone who has sampled the authentic dish will never forget the distinct sweet and salty taste of its soup, as well as the fluffiness and texture of its noodles. 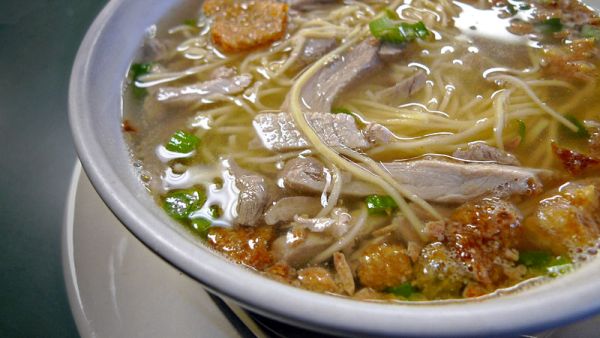 The La Paz Batchoy’s soup is crucial to the whole dish. In fact, many local restaurants encourage their patrons to request additional servings of the soup. It is made from shrimp and beef broth, beef loin, chicken strips, crushed pork cracklings, and various pork organs.

This dish would normally include the pig’s kidneys, the spleen, the liver, and even the pig’s heart. Batchoy noodles, on the other hand, are often made from round egg noodles, like the Miki noodles. Its noodles bear some similarities to that of spaghetti but it is a tad finer.

This dish derives its name from the particular area of Iloilo City where it was originally sold, namely the La Paz district. There are contending accounts as to who actually invented the dish. However, all accounts agree that it was invented around the 1930’s. Since then, the Iloilo La Paz Batchoy has become famous throughout the whole Philippine archipelago, with countless restaurants trying to imitate the taste of the original.

The whole preparation process is what makes the original La Paz Batchoy distinct. It is certainly a painstaking process which can take at least three hours. Other restaurants outside Iloilo which serve Batchoy rarely follow the original process. Perhaps this is also why they fail to capture the essence of the dish.

In order to make the soup, marrow bones are put into a large stock-pot and slow cooked for hours, until all the fat and collagen melt off the bones. As the marrow bones cook, other ingredients included in the soup, like the beef and chicken strips, the different pork organs, and the shrimp, are stir-fried together. These are then put into the broth along with the soy sauce for added flavor.

Upon serving, the soup is poured onto a bowl of round noodles. It is also a noteworthy fact that many local restaurants prefer to make their own noodles. To finish it off, crushed pork cracklings, leeks, and a raw egg is cracked atop the dish.

Where to Eat La Paz Batchoy