For those who live in the vicinity or study in the universities along Katipunan Avenue, finding a restaurant can be hard, not because of a dearth of choices, but precisely because there are so many already.

It was a very pleasant experience, then, to find this small, arty cafe tucked in the second floor of a building in Alvero St. Called “The Vinci,” it’s a play on the name of the famous artist because both owners were artists and art enthusiasts themselves. 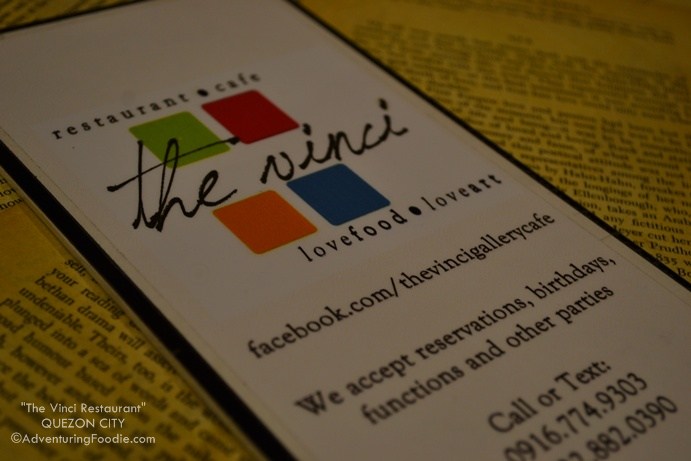 Food + Art in The Vinci Cafe.

I was the first one to arrive in The Vinci for another Eats a Date event of Open Rice Philippines; that is, aside from Open Rice representative Khaezel Espiritu. At around 6pm, there weren’t so many people there. In fact, aside from Khazel and me, there was only one couple when I arrived. Perhaps nobody likes it here, I thought. I couldn’t have been more wrong!

In the meantime, I used the chance to take pictures of the place. True to its name, The Vinci is art-inspired. The tables were covered with book pages; I can see its beauty but I actually cringed when I saw it. As a book lover, I can’t imagine mutilating a book like that.

There were a lot of artwork on the walls, too, created primarily by co-owner Lara Chiu. Her partner, Agatha Jimenez, also had an artwork on display, but her expertise lie more in the kitchen. She serves as The Vinci’s chef, crafting the menu and making sure that there are always new dishes available. Spacious and colorful The Vinci. All the artwork being displayed are also for sale.

When the rest of the participants arrived, we were served with the cafe’s bestsellers. I’m not a meat-eater (or at least I don’t eat pork, beef, or chicken as much as possible), but I just had to try out their burgers and steak. We were first given the Mona Lisa’s Burger which was served with side salad and potato wedges. Not being a meat lover, all I could say is that it was good. The patty was thick and very tasty, and the servings of fresh lettuce and tomatoes were generous. The fries were very good too, and the salad fresh. Best of all was the price. For P120, it was really a steal!

We were then served the Longganisa Burger. This one I liked better, because the patty was made of Vigan longganisa, and there was even a fried egg topping! I had quite a few servings of this (they served bite-sized portions for us), loving the strong taste of the longganisa tempered with the taste of the egg and cheese hollandaise. At P155, it was still a good deal. However, The Vinci is more than just burgers. They also serve pasta. We had the Pasta ala Ratatouille (P125) and the healthy Tuna Pasta (P140). I liked the Ratatouille; I enjoyed the taste of the tomatoes, pepper, and basil, although I have no idea what a real Ratatouille dish should taste like. Pasta a la Ratatouille in The Vinci.

I was looking forward to the Tuna Pasta, too. As a pescatarian, I always make either tuna or vegetarian pasta at home. That’s why it was a bit of a disappointment when I tasted The Vinci’s version. To put it bluntly, the dish was bland. I’m not a cook, much less a chef, but maybe if they used olive oil, it would taste so much better. Add a few more spices like basil (although I think there was a bit) and maybe a bit more salt when the noodles were cooked, and it would taste differently indeed. In fairness, the menu said that they used olive oil, but I couldn’t really taste it. I don’t know if it’s due to the brand being used. I bought mine in Greece when I went backpacking in Europe for 70 days early this year, and the olive oil (extra virgin, by the way) really makes any dish tastier, no matter what it may be!

We were served two more dishes; Barbeque Ribs (P170) which looked good, if I still ate a lot of meat, and Pork Steak (P155) which surprisingly I found very good when I tasted it. The meat was very tender, and the sauce (red wine, pepper, mushrooms) was perfect. These two dishes are The Vinci’s bestsellers; no wonder, when it’s so affordable and delicious, too! The Vinci owners—Agatha and Lara—told us bloggers what we needed to know. Many thanks to The Vinci!

Owners Agatha and Lara were friends since high school, and while Agatha studied culinary arts and Lara was into painting, both loved the idea of having a restaurant that can combine their passion. They have a lot of other plans for The Vinci, too, like making it a gallery for artists—painters, writers, poets, sculptors—who are open to displaying their work in the restaurant. At the moment, they have a partnership only with UP Fine Arts but they hope to expand later on. The Vinci’s accepting party packages, too, so if you’re interested, just let them know in their fan page (see below).

The Vinci is quite new in the area—they moved here only in April 2012—but it seems that word has spread about its unbeatable combination of art, good food, inexpensive meals. Halfway through our dinner, the people started arriving; from an empty space an hour before, it immediately filled up with couples and groups of friends out to enjoy dinner.

Would I recommend The Vinci? Definitely. It’s perfect for everybody, from solo diners, to couples, families, and groups of friends. If you’re looking for a good but inexpensive meal in a place with a wonderful ambiance, then The Vinci is for you!

10 thoughts on “Restaurant Review: Food+Art in The Vinci Cafe”