Around two weeks ago, the extreme adventure group I’m a part of went to Mariveles, Bataan to rappel the 110-meter rocky Mt. San Miguel. Bataan is around three hours by bus from Manila, and the campsite was right in the village of Barangay Sisiman. We brought tents and some of us brought their own cookset. However, majority just went to the neighborhood stores for our meals. 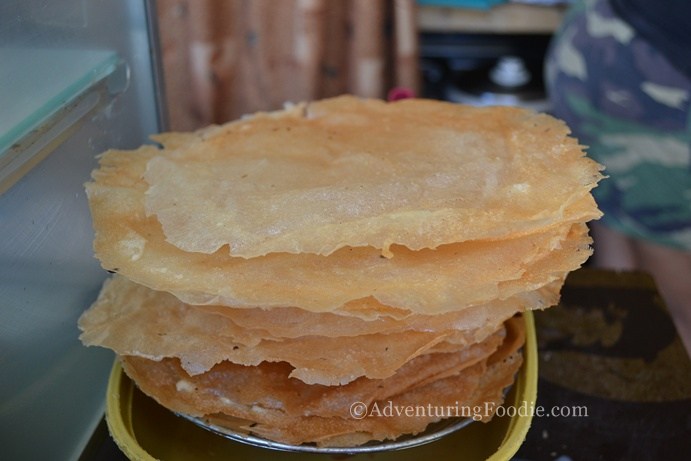 Hayahay (fried lumpia wrapper with milk) ready to be sold.

Quite near the place where we eat is a small stall in front of the elementary school. My friends and I were wondering what they sold; it looked like a crispy piece of something with condensed milk garnished on top of it. Curious to see and taste what it was, we bought one. And got hooked.

This is called hayahay, a snack which the vendor just imported from her province. Making it is quite simple: fry a piece of lumpia wrapper and put garnishing on top of it when it’s done. They use condensed milk, and sometimes even candied coconut. Hayahay the street food is really easy to make! This street food is really fattening, and yeah, maybe unhealthy. Munching on one after every meal, I vowed to just do my running regularly. Missing out on the hayahay is not really something I would want to do when I’m in Bataan.

8 thoughts on “Hayahay from Mariveles, Bataan”