I’m not really a good cook. Yes, I do fix my own meals, but it mostly consists of sautéing or fixing some pasta dish for myself. As a solo member of the household, I have grown quite adept at cooking for one. Give me company though, and I’d usually muck it up.

BUT I do understand one thing: the value of spices. I usually have a few bottles at home, usually for vegetables and pasta because I don’t eat meat (except when I have no choice) and don’t cook it at all. I don’t run out of black pepper (for vegetables), cinnamon (for oatmeal and fresh milk), chili powder (for pasta and vegetable dishes), basil (for vegetables), and oregano (again, for vegetables). 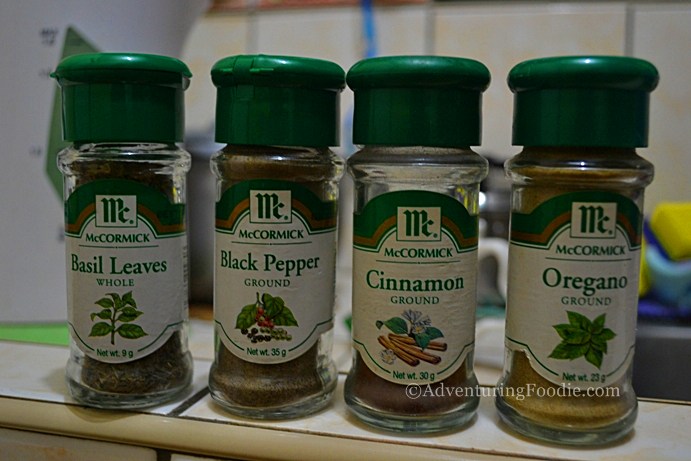 The spices I don't go without.

I was really happy then when McCormick Philippines invited me to their “Discover Flavors” event, which launched their new Facebook app McCormick Flavor HQ. The app is a really good resource of recipes (using their spices, of course), from main dishes to drinks and desserts. (Did you know that you can make an iced tea from rosemary? I didn’t, but it really tasted delicious!) You can also share your recipes there, if you’re the type who likes to experiment in cooking.

The event, held at Bonifacio High Street in Makati, was well attended by media people, bloggers, and other guests of McCormick. In one of the two games, my name was drawn to be a participant, and to my horror, it was a cooking contest! Good thing I got the pasta, and with the very basic ingredients of olive oil, parsley, lots of garlic and a bit of onion, I was able to make a passable Aglio e Olio. It was judged most flavorful too! (Which is not a big thing. Anyone who has cooked using olive oil knows it can make any dish taste great.)

My Aglio e Olio which was named "Pasta de Aleah."

My prize was a set of McCormick spices with their own grinder. I love it, but until now I haven’t opened even one yet. I need to finish my other bottles of spices first. The set of spices McCormick gave me as a prize.

I may not be the best cook, but at least I know the value of spices and have chosen the best there is in the market to include in my food!