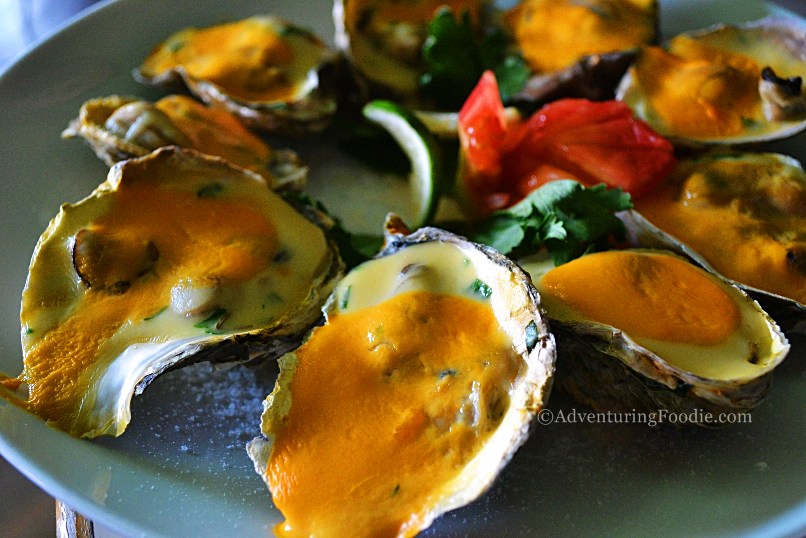 When you think of Malabon, what food usually comes to your mind? Like me, you probably thought of pancit Malabon first, and it’s very understandable. This city is indeed most well-known for that noodle dish.

However, Malabon is definitely more than pancit (and flooding). In the first Kulinarya Festival held recently in the city, they wanted to show people why “eat’s more fun in Malabon.”

Due to its proximity to the ocean and the number of rivers passing by the city, the seafood in Malabon is always fresh and cheap. The baked oyster prepared by Dampa de Paseo, the venue for the Kulinarya, looked very delicious. They had prepared lapu-lapu too (a deep-sea fish), as well as shrimps and other seafood.

Aside from Dampa, other food establishments participated in the festival by showcasing the products that definitely make Malabon a culinary destination. The dish that Malabon is famous for. The variety of dishes displayed in the festival.

All in all, there were almost a hundred dishes presented to the public and the media, which were meant to show the diversity of Malabon cuisine beyond what it’s usually known for. And of course, there was ginataang labong too (young bamboo shoot in coconut milk). Did you know that Malabon got its name from that plant? According to the legend, there were a lot of edible bamboo shoots in the area, “maraming labong” which then became Malabon.

The recently-held culinary festival was just a part of the month-long celebration of Malabon’s 413th Foundation Day on May 21st. Aside from a brief message from Acting Mayor Lenlen Oreta, a cooking demonstration was also held by famous Malabon native Annie Pascual-Guerrero, the founder of the highly-respected Center for Culinary Arts, Manila. Together with another Malabon local, Chef Mira Cruz, they produced the very delicious squid adobo which I had a lot of. CCA Founder Annie Guerrero showed how squid should be cooked.

“Malabon has a distinct food culture,” Oreta said, pointing out that despite the ubiquitousness of fast-food restaurants, Malabon has been able to maintain the distinct taste of its dishes, primarily by passing on the cooking talent from one family member to another. “Most of our people can be considered gifted chefs…even without formal training,” he added.

The Malabon Kulinarya Festival is still ongoing until May 21st at the Malabon City Hall.